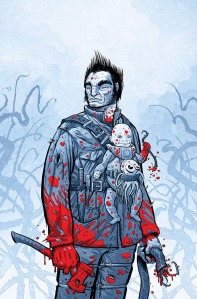 This is a interview article from BleedingCool and by David Dissanayake, and this will be a summary of a interview David had with Justin Jordan and Kyle Strahm on their up incoming comic book, Spread, a new on going series by Image comics. I wanted to help give this a bit more spotlight because I deeply excited about this comic, really looking forward to this new series for a few of my own reasons. I not really a big or even little horror comic book reader, besides for the Walking Dead, I just don’t read those type of comics, yet this comic just caught my eye, with its concept.

Like Dissanayake have said, this is the most interesting idea I have heard yet for a horror comic, Lone Wolf & Cub in an America taken over by John Carpenter’s The Thing. I love that there will be a Asian character lead, if you guys have been a long reader of this blog and read older posts (if not its a good day to start) you know I a big supporter of diversity, especially when it involves the inclusion of anything Asian. Also, love the idea of a badass father and son team (not sure if its a team) surviving in a horrific world, very interesting, and big props to Justin Jordan to giving homage to a classic Japanese manga Lone Wolf & Cub. And last but not least in the reason that I’m a supporter of this series, is because of Justin Jordan, after reading and falling in love with his The Strange Talent of Luther Strode I’ve been a big lover of his work and willing to give him another try and hopefully this is another success for me. Be sure to check out this series when it hit stores July 9th, because I’m expecting on another hit for Justin just like his Luther Strode series, and again be sure to check out the full interview at BleedingCool. And if you like what you see and read then please, share, like, and comment, help us spread the loving. 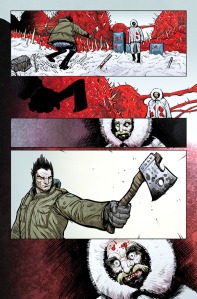 David Dissanayake: So, the Spread’s simplified elevator pitch is John Carpenter’s The Thing meets Lone Wolf and Cub. That sounds fantastic. Tell us a little but about how you and Kyle started cooking up this idea.

Justin Jordan: The real origin of the book was two things that sort of bonded together in my head, which is often how comics come about. I was watching some zombie thing, probably Walking Dead, and got to idly thinking that it’d be cool to have a father son set of zombie killing badasses. Basically, Lone Wolf and Cub in a zombie apocalypse…

Kyle Strahm: Once Justin sent me his notes for Spread, I ran with it. I developed a variety of original Spread creatures, ideas for an ecosystem, character designs and sketches. One of those “creatures” I’m particularly excited about will be showing up around issue four. She’s got a lot of nerve. 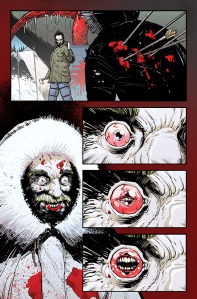 DD: How are you approaching the tone of the story? Obviously it’s heavily horror influenced, but based on the cover there seems to be some interesting possibilities for humor with the baby, or am I completely off-base here?

JJ: …I don’t think you need comic relief in horror, but I think small moments of something funny happening set you up for the hits to come later. Too much grim and you just go numb. But honestly, my sense of humor worms it’s way in whether I like it or not.

But man, there’s some stuff with Hope that I think is funny. Babies are inherently funny.

KS: I’m keen on adding gags to everything I draw and Justin and I have been on the same page as to how appropriate they are. He did ask that I remove all the skin-tags from a character’s face, but we both like that stuffed octopus enough that we added it to the story.

As far as horror, I think it’s important not to make anything in the book seem like it’s doing evil for evil’s sake. All the creatures are really just going about their business and I think they seem creepier with an emotionless, gaping face-hole than with angry eyes and snarling fangs. Our creatures are sincere. I love horror that’s so over-the-top it makes you laugh; movies like Drag Me To Hell and parts of The Thing, but man, those are scary too. 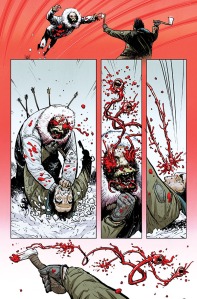 What most excites you two about this project, and what is most challenging?

JJ: Man, getting to create a whole new world to play in is awesome, so that’s probably the bit that excites me the most. The chance to tell a big story, assuming people buy the damn book. Which in comics, you never know.

That’s also the challenging (or, you know, terrifying) bit, telling a long form story that will be, if all goes really well, fifty or sixty issues of story. It’s the biggest thing I’ve ever attempted and I’m nervous. Thankfully massive amounts of Quaaludes help.

KS: The biggest challenge is definitely the scope of the series. Spread could be a long story if we find an audience. What excites me is the breathing room. I’ve done some work as a guest artist on books that already had a defined look. It will be nice to define that look with Felipe.

Disclaimer: Interview and the images are fully the property of David Dissanayake and BleedingCool, be sure to check out the original and full interview.