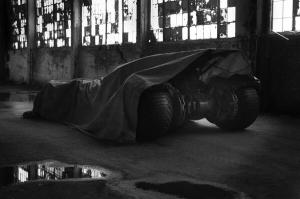 Hello there comic book and movie fans, Tuesday on Twitter, director Zack Snyder, continuing with his earlier full reveal of the 2016 “Man of Steel” sequel’s Batmobile, he also presents to us the very first look at Ben Affleck as the film’s Batman. In his tweet, Snyder clarified he took the photo with his own still camera: 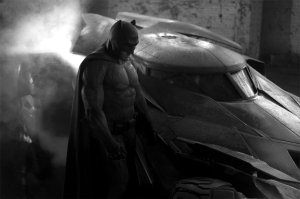 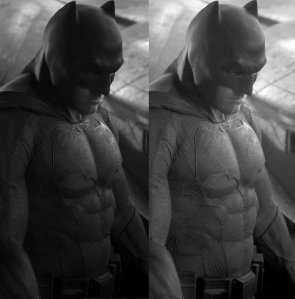 A closeup and lighten shoot tells us much more about the details of the new Batman look, the short ears and wide Bat-symbol on the chest is definitely a take on the Batsuit from Frank Miller’s classic 1986 DC Comics story “The Dark Knight Returns,” which also featured a climactic battle between Batman and Superman. When ask if Frank Millers story will be the basis for the new movie, Snyder said, “We’re not adapting this thing, but it will help us tell you something.” Batman is set to appear in the new Superman still-untitled sequel — commonly referred to as “Batman vs. Superman” — is set for release on May 6, 2016, and, along with Affleck, will star Henry Cavill (reprising his role as Superman from 2013’s “Man of Steel”), Gal Gadot (the first big-screen live-action Wonder Woman), Jesse Eisenberg (Lex Luthor), Jeremy Irons (Alfred), and Ray Fisher (Cyborg/Victor Stone).