I’m so excited for the new Doctor Who special, Doctor Who: The Day of the Doctor, and BBC America is doing a Doctor Who Takeover for the week surrounding its 50th Anniversary special on November 23rd. There will be a marathon showcasing all of the first ten Doctors, and the ninth, tenth, and eleventh Doctors, and a number of new specials covering the history of Doctor Who:

The special programming kicks off on Monday, November 18th, and runs through the following Sunday. 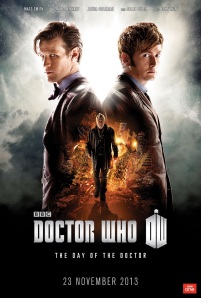 This month’s new releases on Amazon include Katsuhiro Otomo’s Akira: 25th Anniversary Edition (Funimation, “R,” 124 min., BD/DVD Combo $34.95, then was mark down even more to $24.99).  This classic looks spectacular in Blu-ray and also, Funimation has returned the film to its original 1.85:1 aspect ratio—the previous Blu-ray release of Akira was slightly window boxed.  The colors in the Funimation release also appear to be more saturated, though it should be noted that both versions are not as sharp and hard-edged as BD versions of contemporary computer animated features simply because of the hand drawn (and painted) nature of the animation in Akira.  The soundtrack on the new Funimation Akira Blu-ray represents a major advance over previous DVD releases. The 25th Anniversary release of Akira features both English dubs that have occurred since 1988, and there also tons of extra, with over 120 minutes of on-disc extra features; including the “Restoring Akira” documentary, interview with the Japanese Director and original storyboards for the anime.

And out on November 19, 2013 is Eiichiro Oda’s One Piece: Strong World (Funimation, Not Rated,  113 min., BD/DVD Combo $34.98, then was mark down even more to $31.48). As extra goes there seems to be only behind the scenes of One Piece: Introducing Brook, so there really isn’t much to the BD/DVD, but I’m showcasing this because of the extras, for lovers of One Piece this will be a great addition to one’s collection, we get anopther amazing tale from the One Piece crew.

The synopsis is “When the Straw Hats catch wind of trouble in the peaceful waters of the East Blue, they quickly set a course for home! But before they reach their destination, fate leads them into the deadly path of Golden Lion Shiki. This gravity-defying madman needs a navigator, and he wants Nami! Shiki scatters the Straw Hats across the far corners of a floating island filled with ferocious, genetically-mutated monsters, and issues Nami and ultimatum: join his crew – or her friends die! BIG mistake. Luffy kicks his attack mode into Third Gear and begins a brutal rampage across the beast-ridden island. It’s all hands on deck – including a new character – for this watershed adventure in the One Piece canon. Monkey vs. Lion. Winner gets the navigator”

The CW is in the process of making a new series based on DC’s iZombie, which will be written by Veronica Mars creator Rob Thomas and Veronica Mars movie co-writer Diane Ruggiero, according to Deadline. Thomas and Ruggiero will pen the series based on characters created for Chris Roberson and Michael Allred’s Eisner Award nominated comic from DC’s Vertigo imprint, which ended abruptly in August 2012 when Roberson left DC.

iZombie will be presented as “a supernatural crime procedural that centers on a med student-turned-zombie who takes a job in the coroner’s office to gain access to the brains she must reluctantly eat to maintain her humanity.  But with each brain she consumes, she inherits the corpse’s memories, and with the help of her medical examiner boss and a police detective, she solves homicide cases in order to quiet the disturbing voices in her head.”

iZombie is joining several other DC related titles on the CW development list, another is Hourman, according to Hollywood Reporter.  Mcihael Caleo, who wrote the pilot for the Ironside and screenplay for The Family, will write Hourman and executive produce.  Also executive producing will be Daniel Lin (of Ninjago) and Jennifer Gwartz, also of Lin Pictures. Hourman is a character that can generally gain superpowers for an hour and/or see events one hour in the future.

Also on that list is the Flash spinoff from Arrow, Gotham that is in development at Fox, and Constantine at NBC, DC is planning for big things in there TV world.

Check out the top sells in comic stores in October to see what is hot right now.

Batman: Death of the Family volumes took two of the top three graphic novel slots, and other Batman volumes took another two slots, for a total of half the top 10 graphic novels.  The two Saga collections are stubbornly hanging in the Top 10.

These are some good titles to check out, great wide range of choices.

1.  Hyperbole and a Half: Unfortunate Situations, Flawed Coping Mechanisms, Mayhem, and Other Things That Happened… by Allie Brosh (Touchstone)

9.  The Black Beetle Volume 1: No Way Out by Francesco Francavilla and Jim Gibbons (Dark Horse)

10.  The Unwritten: Tommy Taylor and the Ship That Sank Twice by Mike Carey and Peter Gross (Vertigo)

12.  Relish: My Life in the Kitchen by Lucy Knisley (First Second)

16.  My Dirty Dumb Eyes by Lisa Hanawalt (Drawn and Quarterly)

19.  The Property by Rutu Modan and Jessica Cohen (Drawn and Quarterly)

Also check out Publisher’s Weekly’s 2013 best graphic novel list, to see how the two match up with each other. Publisher Weekly

Please help us out and support us, spread the word around about us, let the world know you are a geek lover, and also like us on the posts and on facebook to let us know that you enjoy the posts, and leave us comments about anything. Comments about what you like to read more would also be very nice,thank you for the love and support so far.